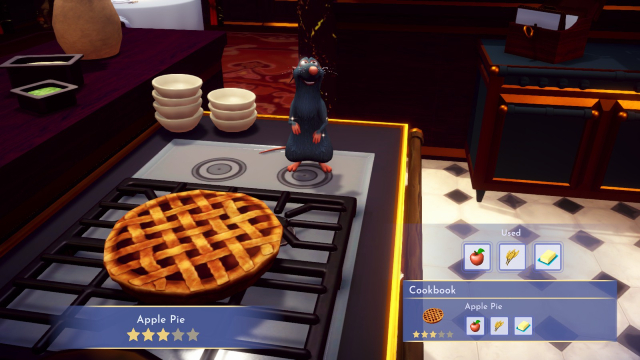 The wide array of recipes in Disney Dreamlight Valley serve a slew of different purposes. You’re able to consume them for energy, sell them for Star Coins, and give them as gifts. However, you’ll also need to cook a few specific recipes to complete certain quests. A particular meal that you’ll need to make is the Apple Pie recipe, which is required to complete Remy’s An Important Night at the Restaurant quest. Here’s how to make it.

How to Make Apple Pie in Disney Dreamlight Valley 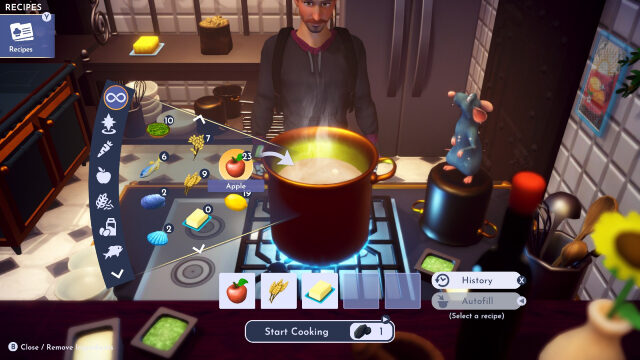 Apples are some of the easiest ingredients to acquire in Disney Dreamlight Valley. They can immediately be found growing on trees throughout the opening area in the Plaza. If there aren’t any, you’ll also be able to purchase them from Goofy’s Stall in Peaceful Meadow. However, you’ll have to spend 50 Star Coins.

You’ll also be able to buy Wheat at Goofy’s Stall in Peaceful Meadow for only three Star Coins. Alternatively, you can also grow them instead by purchasing Wheat Seeds for one Star Coin each. It only takes them one minute to grow so you’ll be able to gather plenty in no time.

Lastly, Butter is available for sale at the Chez Remy pantry for 190 Star Coins. Before you can purchase ingredients from Remy’s restaurant, you’ll need to have finished Remy’s A Restaurant Makeover quest first.

The Apple Pie recipe is also one of the dishes you’ll need to make in Remy’s opening quest called An Important Night at the Restaurant. During the quest, Remy will ask you to choose between two desserts: either the Apple Pie or Banana Pie. If you decide to go with the former, all of the ingredients you’ll need to make it will be within the Ratatouille Realm, so completing it should be a breeze.

Once you’ve made the Apple Pie recipe outside of the Ratatouille Realm, you’ll be able to sell it for 303 Star Coins. However, you can also eat it instead. This traditional treat restores a whopping amount of 1,137 Energy, which is enough to refill your Energy bar.

Check out these recipe guides for more on Disney Dreamlight Valley: