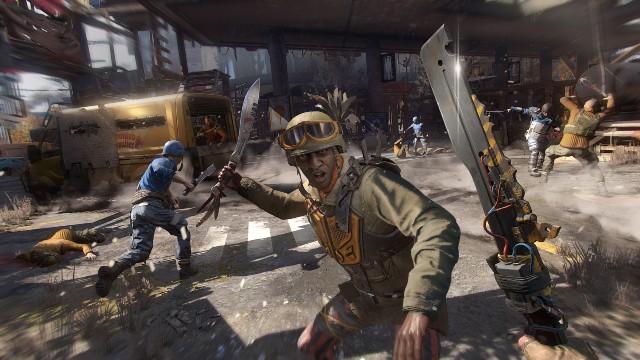 A new Dying Light 2 update arrived today that will make Techland’s open world zombie game run even better. Billed as the first of many community updates, there are tweaks to mobs alongside optimizations for all applicable platforms. That’s especially the case for Xbox Series X|S, with both consoles receiving significant performance boosts. Read on to learn all about this exciting new Dying Light 2 update! 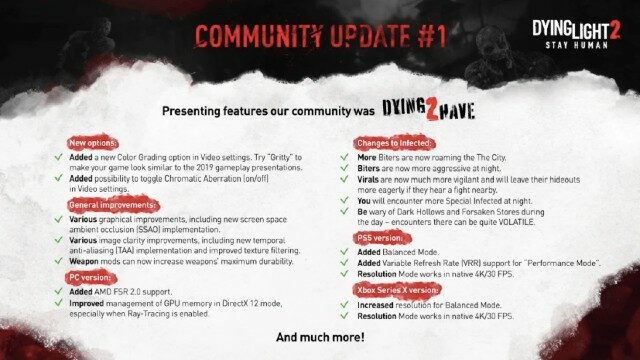 Of the changes made to Dying Light 2 on Xbox Series X|S, the most significant of them are to do with FSR technology. This is a new rendering system added to Dying Light 2 by Techland fairly recently, which has been activated with today’s patch. It allows renders to happen more smoothly using AI, without concerns around stuttering elsewhere. However, it should be noted that the Series X and Series S updates have their own individual changes.

First off is the changes to the Xbox Series X version of the game. Following this update, Balanced Mode now runs at 1404p at 60 FPS, converted to 4K thanks to FSR. Equally, both Performance Mode and Quality Mode can now output 4K image with FSR. Resolution Mode, still focusing on image quality, outputs native 4K at 30 FPS.

Over on Xbox Series S, the changes are slightly less significant. However, that isn’t too much of a surprise considering this cheaper next-gen Xbox machine is less powerful than its X counterpart. With this update, Quality Mode now outputs upscaled 4K image with FSR. It may sound meager, but considering the Series S cannot natively run 4K output, it’s quite the achievement.

As such, this Dying Light 2 update is proof of the capacities of both the Series X and Series S. We all know that the former console is powerful, but being able to harness FSR to project 4K at 60 FPS is about as high-powered as console gaming gets. Over on the Series S, this is one of the first examples of developers harnessing upscaling to run 4K games on a system that natively cannot hit that resolution. Therefore, it’s a mightily impressive patch.