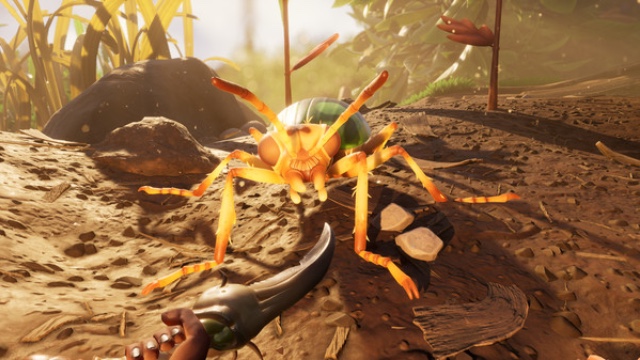 Looking for the Grounded Candy Conumdrum Burgl Chip? We’re here to help. This elusive collectible is deeply hidden within the Grounded map, teased only by a riddle. If you can solve it, the chip is yours, and you can exchange it at Burgl’s Chop Shop for exclusive items. If you don’t fancy the hunt, fear not – we’ve got the Candy Conundrum Burgl Chip location for you!

Where to Find the Candy Conundrum Burgl Chip in Grounded

The Candy Conundrum Burgl Chip quest is a rather straightforward one, and here’s how to do it. You’ll have to head to the Sandbox, and prepare yourself to unlock some pesky doors along the way.

Firstly, you’ll need to have completed the previous Burgl Chip quest. That is the Dark Descent mission, which sends you to the Black Ant Hill. Following that, head to the Sandbox, and enter. You’ll come across several rooms within there, but it’s a locked lab room that you’re looking for.

To open this lab door, you’ll need the Burgl Chip, called the Assistant Manager Keycard, from the Dark Descent mission. That’s why you’ll need to have completed it first. Once you’ve opened the door with the Assistant Manager Keycard, it’s relatively plain sailing from there. You’ll have to head down a short corridor, following it to a main laboratory room. You’ll see the keycard simply laying on the table. All you have to do is nab it, and head back out to freedom. You exit the way you came, back through the corridors and out of the sandbox, and from there you’re all done!

With the Candy Conundrum Burgl Chip in tow, you’ll be able to spend it at Burgl’s Chop Shop. There’s some exclusive loot up for grabs there, so be sure to head on over and trade your chip in for some new loot.