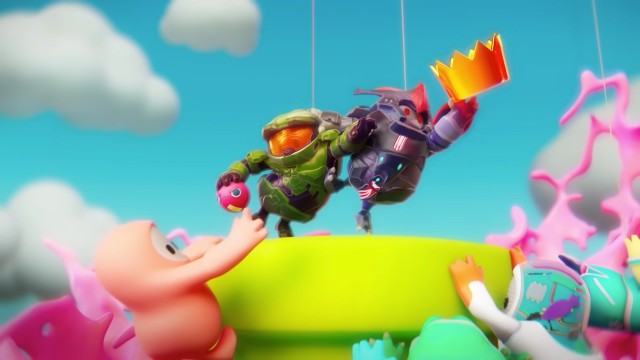 As hit party title Fall Guys turns multi-platform later this month, developer Mediatonic is celebrating with a new Halo crossover. Named Spartan Showdown, this limited-time event will bring a glimmer of Halo action to the battle royale hit, with new decals and likely some other cosmetic items to unlock. With just a few short days until its release, check out everything we know so far about the Halo crossover in Fall Guys.

Yes, Mediatonic announced this new limited-time mode at the extended Xbox Showcase yesterday (June 14). Called Spartan Showdown, it’ll launch on June 30, not long after the game goes free-to-play and multi-platform on June 21. The event runs for a week, ending on July 4.

Jump into a Spartan Showdown in @FallGuysGame on June 30 | #Xbox pic.twitter.com/NRSeGfACY2

The trailer kicks off by panning around various Fall Guys characters suspended in motion, in the midst of a battle. It then pans to a character atop a spire, wearing Spartan armor reminiscent of Master Chief. The trailer ends there, meaning we sadly didn’t get a look at gameplay at this stage. Nonetheless, we did see the new Spartan decal which will no doubt be available in the in-game store.

However, we don’t yet know what this new mode will actually consist of. We imagine there will be some Halo-themed obstacles and gear in the store, but probably not any bespoke rounds added especially for it. Equally, it’s unclear whether the mode will come to just Xbox One and Xbox Series X/S, or other platforms too. Either way, it’s a huge promotional boost for Fall Guys, cementing it as a bona fide multi-platform darling. Considering it’s been a PlayStation console exclusive for nearly two years, seeing it cross over with Halo is certainly a big step.

The move to free-to-play will no doubt breathe new life into Fall Guys, and the Spartan Showdown mode certainly aims to strike a chord with Xbox players. Halo has long been Microsoft’s staple IP, and seeing it in Fall Guys will be huge for fans.