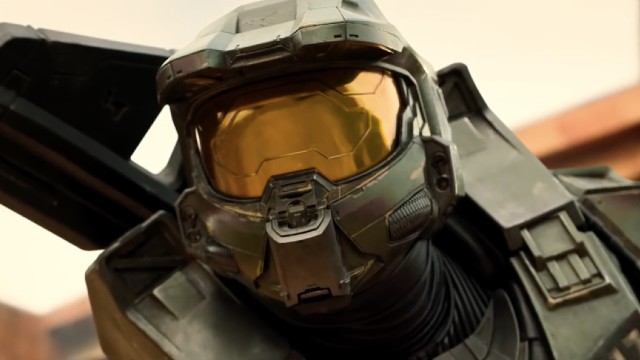 The first trailer for the upcoming Halo TV show is out now – and it’s out best look at the beloved Master Chief in live-action. The minute-long teaser debuted at this year’s Game Awards, pinning the new show for a launch early in 2022. Join us as we break down the trailer, pointing out what Halo fans have to look forward to.

Yes, the first trailer for the Paramount+ Halo TV show is out now, and as you’d expect, it’s as faithful to 343 Industries’ games. While it doesn’t give away too much in terms of plot, it’s clearly a love letter to the game series.

The trailer opens with shots of a barren desert planet, with a towering spaceship trapped in the rubble. That immediately shows us that the Halo TV series has conflict at its core, exploring a period where war has ravaged the galaxy for decades. We then see shots of Dr. Catherine Halsey, played by Natascha McElhone. In the games, she’s best known as the pioneer of the Spartan project through which Master Chief comes into play.

This appears to be the same route the show will take, as we then get glimpses of Chief’s trademark costume in action. He’s played by Pablo Schrieber in the show, though don’t expect him to take his helmet off at any point. The trailer ends by showing several Spartans in a hangar, preparing for battle, before close-ups of Master Chief on the aforementioned desert planet. He lands with a triumphant gaze, establishing him as a brand-new hero for TV audiences.

It’s worth noting, however, that the Halo TV show doesn’t situate itself within the game’s canon. Instead, it’s something of a soft remake, portraying the battle for the Halo rings between the Spartans and Covenant for the first time. That might upset fans of the games hoping for expansion of the lore, but it makes sense to entice new audiences.

The Halo TV show launches on Paramount+ in early 2022.