Sea of Thieves has a dynamic world, from waning and waxing waves to huge ships sailing the seas. That dynamism includes thunderstorms that roar across the open water. And, under very specific circumstances, you may even be struck by lightning. Normally that would be a bad thing, but in Sea of Thieves, getting struck with a thunderbolt unlocks a few special goodies. Here’s how to get started.

How to Get Struck By Lightning in Sea of Thieves 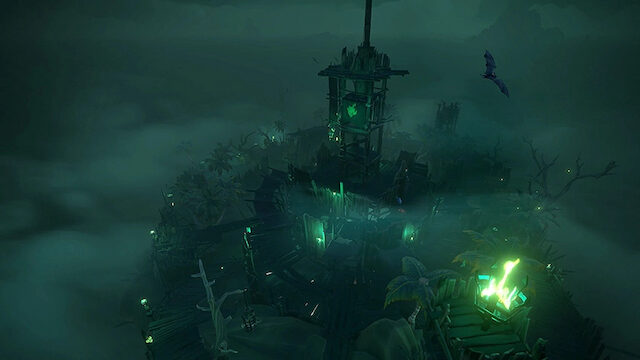 There’s one reason to be struck by lightning in Sea of Thieves. Each time you die in the game, if you die in a specific way, you’ll be given a special lantern color based on the way you died. If you die by lightning strike, you’ll unlock the white lantern color. Unfortunately, it’s quite a rare situation to encounter.

So, how can you get started? Your best bet is to take note of where storms normally form. Due to the dynamic nature of the world of Sea of Thieves, the path of storms is random. That means you can’t predict where the storm is moving. However, there is one constant for storms: they’ll never go into the Devil’s Roar area.

So, once you find yourself in a storm, what do you do? The first thing you’re going to do is get down to low health. Whether that’s jumping from the crow’s nest or setting yourself on fire, be sure to lower your health down to one hit. A lightning strike alone will not kill your character at full health.

Once you’re near death, head back up to the crow’s nest and equip your cutlass. Being struck by lightning while holding a cutlass will deal more damage than on its own. On top of this, you’ll be more likely to be struck while holding a cutlass. Once you get struck, and if you’re (un)lucky enough to perish, go to the flame on the ship and equip your white flame to get closer to the accommodation.

For more on Sea of Thieves, have a look at some of our other guides: