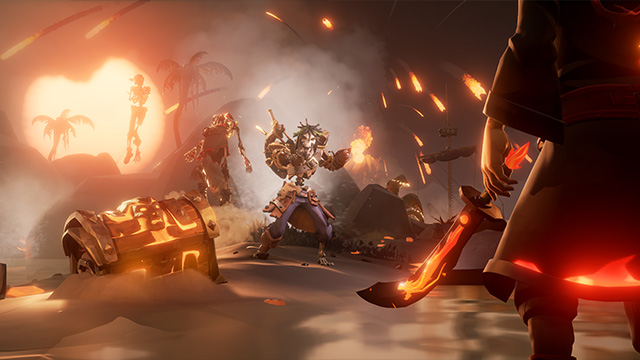 Curses are cosmetic items in Sea of Thieves that will change the way your character looks. For example, consider the excellent Skeleton Curse, which will turn your character into a skeleton. It’s an ideal look for ne’er-do-well pirates on the open waters. However, it’s a difficult and time-consuming curse to unlock. If you want to get all boned up in Sea of Thieves, we’ve got all the information you need featured below.

How to Get the Skeleton Curse in Sea of Thieves 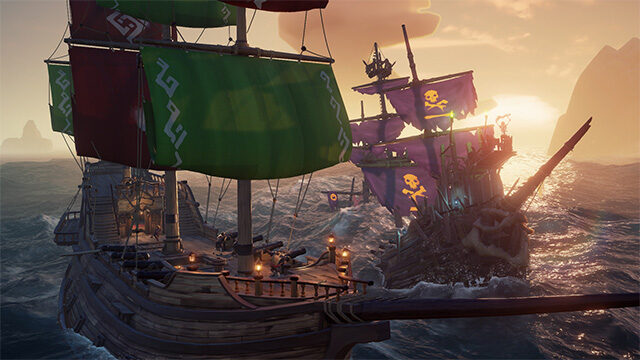 A bit of background information: Season 8 introduces a faction war between two factions, The Servants of the Flame and Guardians of Fortune. Once you boot up Sea of Thieves, you’ll find an hourglass sitting in the captain’s quarters of the ship. This is where you’ll choose your side. Don’t forget to prepare your ship, and then choose to pledge allegiance to the Servants of the Flame. Once you’ve done so, you can begin matchmaking.

When you join matchmaking, your ship will dive into the water. Use the time to prepare for your fight, stocking up on cannonballs and loading your cannons with ammo. When you emerge from the water, you’ll be nearby another ship that’s ready to fight.

For every ship you destroy without sinking, you’ll gain a multiplier. This multiplier will cap on your fourth ship and will continue to grant you multiplied allegiance with the Servants of the Flame. However, you’ll now become a highly valued target, which means other ships will be gunning for you.

Continue to fight ships with your multiplier until you’ve reached Allegiance 100 with the Servants of the Flame. Remember, you’ll need to reach level 75 in reputation with the Reaper’s Bones as well. Once you complete both of these prerequisites, you can make your way to the Reaper’s hideout to complete the quest.

There you’ll be taught a new shanty, which you can play on your instruments in the hideout. Doing so will take you to the underground caverns to participate in a ritual. The ritual will have you drink out of Flameheart’s cursed chalice, which will give you the Skeleton Curse. After that, you can equip and unequip the Curse from your vanity chest.

For more on Sea of Thieves, be sure to check out some of our other helpful guides: